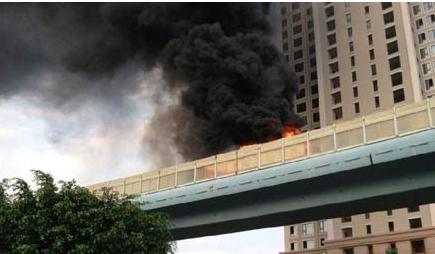 The public transport system throughout the country has banned the use of gasoline on public transport such as buses and subways. However, it has appeared on the scene of the accident. This makes us feel that it is only a banned and cannot play its due role. To follow the subway security inspection method, it is especially necessary to carry out safety inspections in the BRT system and even the ordinary public transportation system.

At 18:20 on June 7, Xu, on a bus rapid transit lane (BRT) in the center of Xiamen Island, a bus on the express bus No. é—½ D-Y7396 suddenly appeared fire, and the passengers of the vehicle later recalled. Then at least three explosions sounded one after another, then the smoke tumbling. As of today, the accident resulted in 47 deaths and 34 hospitalizations due to injury. The State Council working group composed of the relevant departments of the State Council and the Ministry of Public Securityâ€™s public security, criminal investigation, and fire control departments and relevant experts arrived at Xiamen at 1 o'clock on the morning of the 8th. They are working in an orderly and orderly manner.

The explosion of the Xiamen 6-7 express bus reminds us of the burning of a bus at the Chengdu 9th Road in Sichuan Province on June 5, 2009, which killed 27 people and injured 74 people. On July 2, 2009, the case was scuttled and deliberately arsoned. The criminal suspect Zhang Yunliang had died on the spot.

As an important means of transport in some cities, the rapid transit system can solve the problems of congestion and delay of buses in the corridor with its rapidity, comfort, and convenience. For the city, it has important benefits and benefits. Therefore, its development speed is getting faster and faster. There are currently dozens of first and second-tier cities such as Beijing, Guangzhou, Chengdu, Jinan, and Xiamen that have already built and operated BRT in the country. At the same time, dozens of third-tier cities are also planning to build. Among them, the Xiamen Bus Rapid Transit System is the highest-level public transport project in the construction of the domestic bus rapid transit system and has set a number of national record. The Xiamen Bus Rapid Transit System, as the main force in Xiamen's public transport, is playing a huge role in Xiamen's urban transportation. effect.

For example, the Beijing Metro Security Survey is the first city in the world to carry out security inspections on urban subways. It has been learned that since the Beijing Subwayâ€™s security inspection was conducted on June 29, 2008, a total of 2.468 billion items have been inspected, and 162,600 items of contraband have been seized. The number of items to be checked is 0.07, including 1497 pieces of military and police equipment, 30 simulation guns, 1 artillery shells, 361 bullets, 3 bombs, 59,908 inflammable and explosive materials, 53,697 tools, and 62,409 people from the station. The public security handled 7285 people.

The content of the subway security inspection is mainly to check whether the passengers and their baggage items carry dangerous articles such as firearms, ammunition, explosives, corrosion, and toxic radioactivity to ensure the safety of the subway and passengers.

However, in the Xiamen BRT bombing case, the relevant experts and the local public security agency conducted an on-site investigation and found that the on-site combustion accelerators were found to be gasoline, and the buses used diesel engines. The fire bus tires are normal and the fuel tank is also complete. It can be concluded that there was a fire caused by gasoline in the bus, which led to an explosion.

However, in August 2011, the media had reported that each site of Xiamen BRT will arrange at least one full-time security inspection staff to check whether passengers have contraband. Starting in September, this move was first implemented in the fast three-line.

From the report at that time, it can be seen that relevant departments have found that passengers carrying the flammable and explosives and other contraband products in the Xiamen Bus Rapid Transit system also realized that the passenger flow of the bus rapid transit system is large and the operation of the viaduct is also in case of fire and explosion. Rescue and escape are all very difficult. Therefore, the relevant departments decided to arrange at least one full-time security checker at each site of the BRT to check whether passengers have contraband on board.

After the explosion of 6-7, the "arranging a full-time security personnel at the site to carry out safety inspections on passengers" did not play its due role. From the perspective of the security system, only civil air defenses can cause missing and flaws. In the security system, security prevention refers to the activities of preventing and stopping the theft, robbery, explosion and other security incidents. It is divided into three means: "human defense," "physical defense," and "technical defense." The three types of precautions (methods) are not isolated and not completely separated. They are based on each other, complement each other, and integrate into one integrated function and benefit. In fact, a good safety precaution system (which can get good preventive effect) must be a combination of human, material and technical defenses, a combination of technical systems and scientific management, and a system that emphasizes both system construction and system operation.

After the arson attack on the bus in Chengdu, people talked about the problem of â€œlife-saving hammerâ€. However, after the winds passed, the management of some cities in this area has been lax. The rapid bus explosion in Xiamen once again sounded the alarm for public safety. No matter where or in any area, we must be vigilant. No matter how serious we are after the disaster, it is not as good as burying hidden dangers in the bud. We hope that the occurrence of the explosion accident of the Xiamen Express Bus will enable the relevant departments to inspect thoroughly in the face of bitter lessons.

System is of high stability and

with a number of peripheral interfaces.

- A variety of text can be switched.

- Function of slope setting can set the start and stop of movements, so as ensure the smooth movement